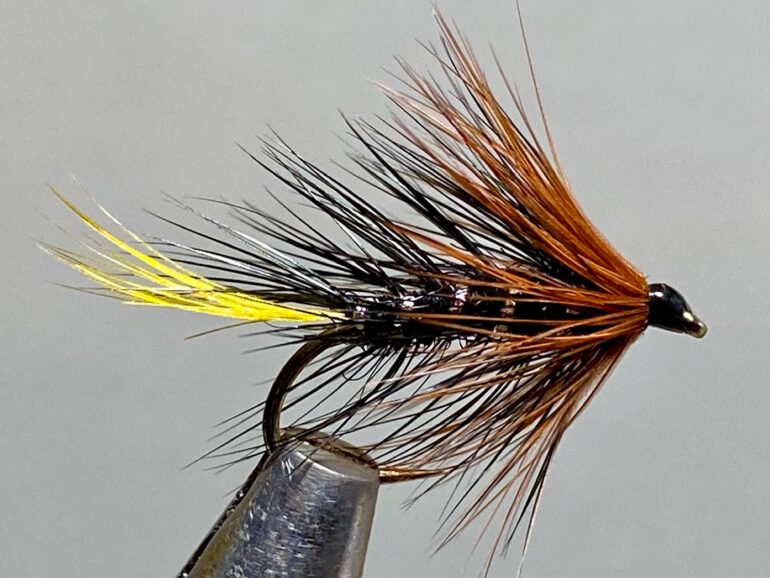 Apologies for the late posting of this blog and thanks to Les Lockey for doing another Monthly Fly blog for us to post here:

Fly of the Month – April

Photo 1. Secure the hook in the vice, wind on a bed of thread from the eye to just before the bend and remove the waste thread.

Photo 2. Tie in a golden pheasant crest feather on top of the shank as a tail and trim the waste end to the length of the body. Follow this by tying in the oval tinsel and again leave the waste end the same length as the body. Now bind down all the waste ends with thread and return the thread to the tail.

Photo 3. Dub some seal’s fur onto the thread and wind the dubbing up the shank to form a slightly tapered body.

Photo 4. Using well waxed thread, tie in the cock hackle by its stalk and trim off any excess stalk. Palmer the hackle by winding on 2 turns of hackle one behind the other, before continuing to wind the hackle in open spirals down the body to the tail. At this point, trap the hackle with a turn of the silver tinsel and continue to wind the tinsel in open spirals up the body and through the hackle fibres, before tying it down securely at the head. Remove the excess hackle tip, trim off the waste tinsel and tidy the head area with a few wraps of thread ready for the head hackle. If required, lightly brush the body with Velcro to tease out a few fibres into the hackle.

Photo 5. Immediately in front of the body hackle, tie in the hen hackle by its tip and remove any excess tip. Take hold of the hackle stalk and gently stroke the hackle fibres together, then wind on 3 or 4 turns of hackle moving towards the eye. Secure with thread and remove the waste hackle.

Photo 6. Tidy the head with thread, whip finish, remove the thread and varnish the head to complete the fly. 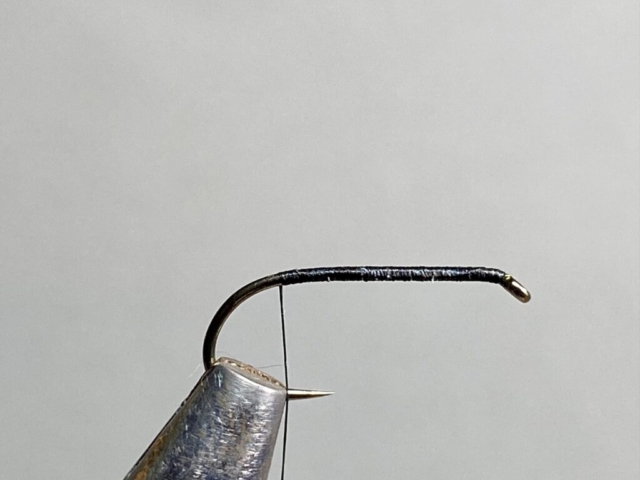 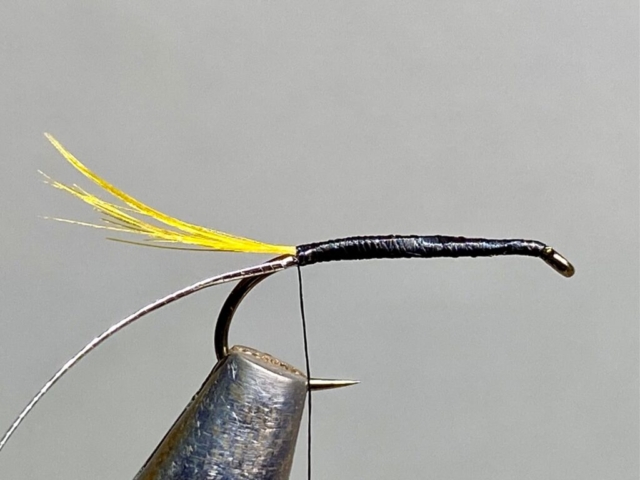 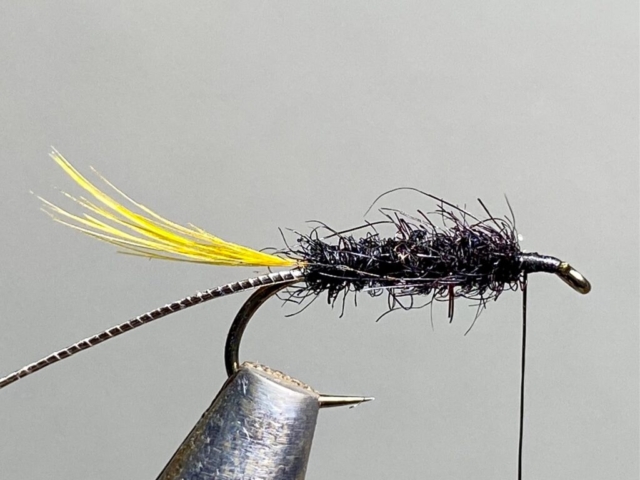 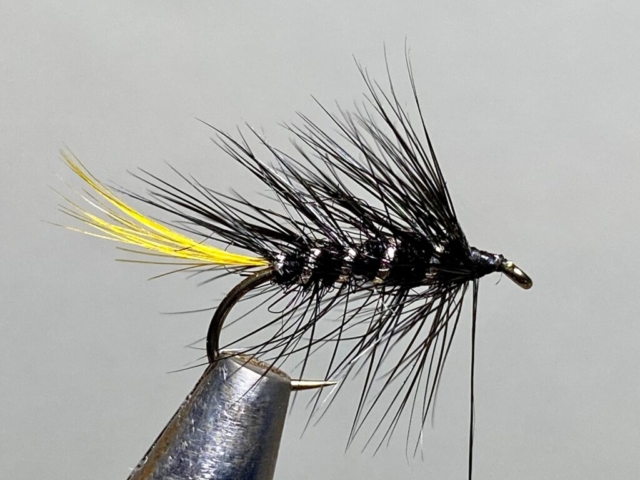 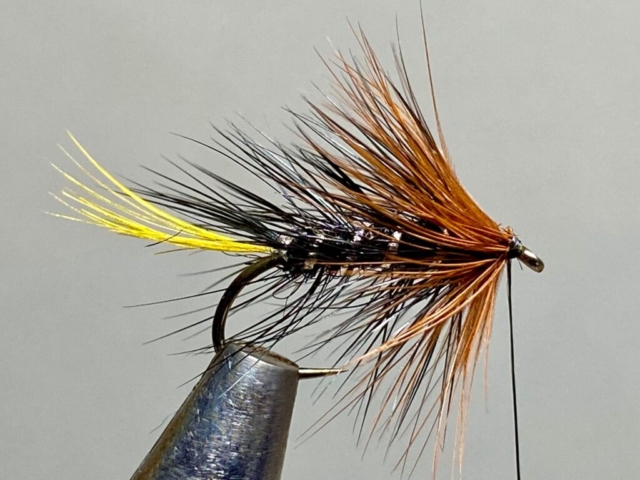 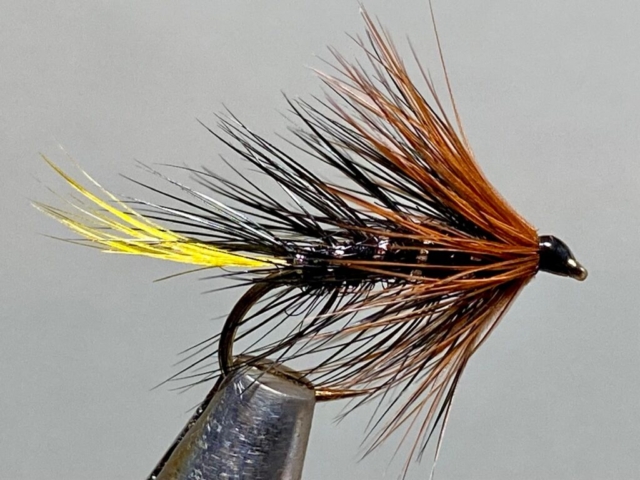 If the above is too much effort, yellow cock hackle fibres are a reasonable substitute, or for a more modern twist, try using Glo Brite floss, shade No. 11, Phosphor Yellow, or No. 12, Lime Green, or for something a little bit different, try No. 8, Amber.

Apply seal’s fur sparingly onto lightly waxed thread and always twist the dubbing in the same direction. Pay particular attention to the fibres closest to the shank, as after the first turn or two, these will anchor the dubbing to the shank allowing the remaining dubbing to be wound on and twisted around the thread in stages as more thread turns are made.

Baby seal’s fur is softer and less springy than adult fur which makes it much easier to use, but unfortunately, it can be quite difficult to obtain. For particularly springy adult fur, mesh the fibres together by rubbing the fur into a ball in the palm of your hand before teasing it out onto the to the thread. Alternatively, try mixing the seal’s fur with a pinch of the same coloured rabbit fur, as this helps the fibres to bind to the thread. It also helps to moisten your fingers before dubbing the fur onto the thread.