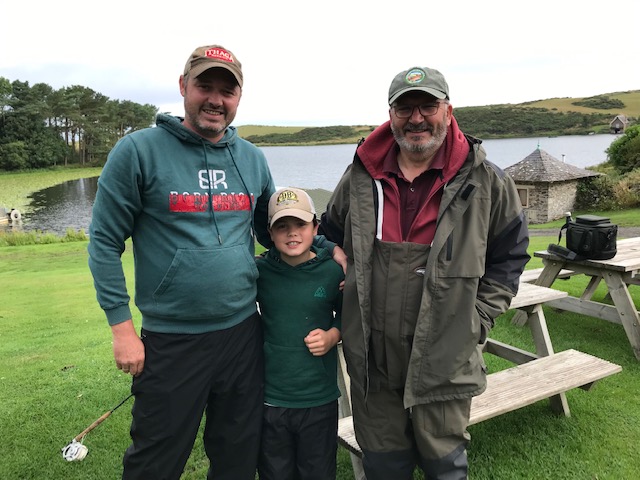 This will be shorter than normal loch report as there is very little to report that is different from the last report. We are deep in to the summer fishing and as always, the fishing is much tougher at this time of the year.

However, we are seeing some very good days in amongst the tougher days and as a general observation, evenings are fishing much better than the earlier slots.

We are also seeing a distinct fall in temperatures, and as we write this, a significant amount of rain at last. As a result, the water temperature is falling quite rapidly which usually leads to better fishing conditions.

Because the temperatures are much lower and we are experiencing a bit more wind, the aerator is being switched off during the day and used only as and when we feel it is necessary to keep the water conditions optimum.

We are also almost at the end of the weed cutting for this season with just a few tweaks here and there before we remove the weed cutter from the loch. The weed cutting this year has been extremely successful with lots of below the surface weed removed and with very little disruption to fishing. We will probably cut a few channels in to the line of weed along the south shore to help the bank anglers but apart from that, very little else needs doing.

We mentioned that there have been some very successful outings and in general, midge tip lines (6 feet or more) using a combination of buzzers and diawl bachs have been the most successful tactics. The deeper areas of the loch have yielded the most fish, however those people that have been prepared to drift have reported picking up fish in many other parts of the loch as well.

Insect life has slowed down considerably but daddies can still be seen in large numbers, around the paths and along the margins of the loch. The swallows and martins are also working hard over the loch at various times of the day which suggests that there are still hatches taking place.

In short, all of the above leads us to believe that the better times are just around the corner.

Meanwhile it’s been good to see some of our members bringing their children and grandchildren along for a few hours out on the loch together (see photo of one member, George before going out for a fish with his son and grandson) . Holiday guests too with young ones are enjoying the lovely weather we’ve had even if the fishing has been tough it’s been good to see families enjoying the loch.

First of all, this is not a fishing report, but a few observations I have made over the past six months since the club was formed. The first thing that comes to mind is the pleasant atmosphere and the relaxed attitude of the club members. I am not a boat fisherman but as I stand having a few casts off the Boathouse jetty I can’t fail to see the good condition the boats are in and the cleanliness of the them as they are ready to be launched. As I sit on the bank thinking of what to try next I listen to the banter of the boat fishermen telling stories, swapping information on flies to try, how to fish them what line to use, retrieve to use etc. There is one boat angler (who I shall not name) who really keeps me amused with his remarks as he misses a take or drops a fish off he clearly knows his stuff and a good fly tier to boot. If you boat fishers ever feel the need to stretch your legs, why not take a stroll around the loch and see it from a different angle, and, on the way, you will see the effort that has been made for the bank angler to access the water.

Then there are other observations like the stocking policy, the clarity of the water ,and the hard fighting well- conditioned fish, Also the tremendous amount of work that has been done , the first thing is the controlled barrier which in its self must have taken some installing, and then the fishing hut for shelter and even more gossip as we use the facilities provided and drink the free tea and coffee supplied , other facilities that I have noticed that there are spare buoyancy aids supplied, heavier mud anchors, replacement fully charged batteries etc . I’m sure that all of the members will appreciate the amount of hard work that has been put in by Gareth and Carmel to get the loch and the facilities in to the shape that they are in. Also speaking to holiday guests who are of the same opinion and return year after year ………. it speaks for itself.

From a very happy club member,

The club days are as follow over the next two weeks.