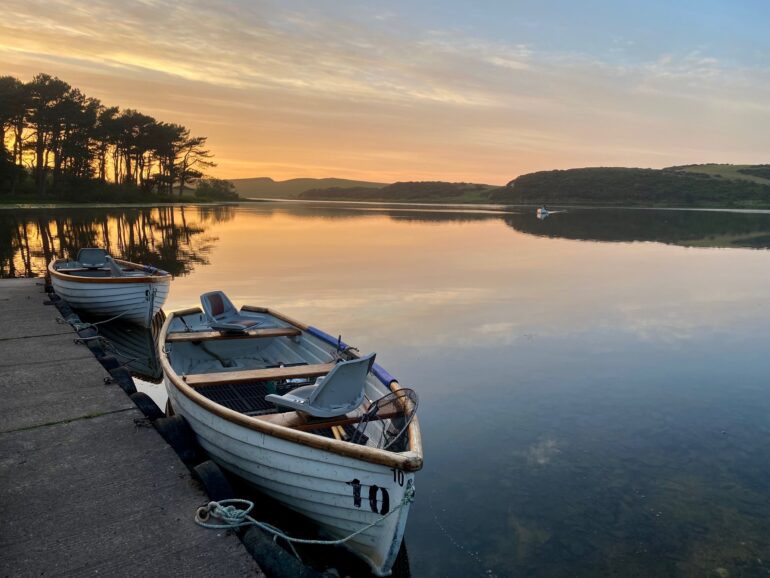 Apologies for the lateness and brevity of this report – we were away a couple of days & just got back so the report is a brief one but thanks to Robbie and Les Lockey there is more in it than there would otherwise have been!

This last fortnight has seen some very sunny days and then some much needed rain which has seen the loch rise but only by a tiny amount. We heard that Edinburgh had a biblical downpour one night which we would have been grateful for here. However the fish seem to still be reasonably active considering the time of year and the  water remains clear. The weed is inevitably growing, but is not quite yet breaking the surface or causing any particular problems.

There was a day or two about a week ago that the blanket weed popped up and sat on the surface of the loch at the north end but we got the weed cutter out and hoovered up what we could to reduce any problem for anglers with motors.

All areas of the loch are holding good numbers of fish with no particular hot-spots to report and boat and bank are fishing equally well. Please see the various loch reports from members below for more detail on how the loch is fishing, thanks.

Our club day next week is Thursday  15th July when we will be welcoming Caledonian FFC.

The week after, the club day is Sunday 25th July and Cockburn AC will be here.

As always, we extend a warm welcome to the visiting clubs and hope for good conditions for them.

(Members are reminded that they can still fish on Club Days but need to phone us here at the loch to check for availability on those days.)

So what is Fishing all about?

You’re in a Competition at a senior level then it probably about numbers.

For a laid-back Club outing it is probably about your first four fish and whose is the heaviest.

Any fish after that are just for your own enjoyment.

Just gives more Members a chance which is good.

Then if it is a day out with a friend there may be just a hint of numbers at the end of the day and maybe if he “wins” you get the Drinks but you will get one back. 😊

Then for a Club Day you all go for an after “Match” meal and although there may be a slight moment of pride when the results are announced it is more about the Fellowship.

Perhaps a bit of exaggeration about the big one that got away!

Possibly a bit of economy with the truth about how many you lost…………….

Some friendly banter and maybe some future fishing arranged.

Then there are the really outstanding days.

Meeting up with an old Friend you haven’t seen for 20 years.

No reason for drifting apart other than you just went in slightly different directions.

A year turned into two and in the blink of an eye 20 years had gone by and grey hair and perhaps little or no hair had set in. 😊

But finally the date is set despite Weather and Covid and other commitments but THE DAY does arrive.

Almost by telepathy you both decide this is a Dries and Nymphs Day. No Lures or fishing on the Boils or Anchoring in a hotspot.

Proper Fishing on the drift appropriate for the circumstances.

And a Great Day.

Not massive numbers but plenty and Honours probably just about even but nobody really counting.

As Good a Day as I can recall.

The returns book is now back in the hut and so we have not had the same number of reports being sent through by anglers, this is the only one which covers a week’s fishing:

With the exception of the 26th, which was cold and drizzly with a strengthening wind, the weather for the rest of the week was dry and cloudy with sunny periods and a light East Southeast wind prevailing which often died to a flat calm.

Fishing was generally best up until about 2.30pm and for dry fly work, the period from 11.00am to 1.30pm was optimal.  During this time

fish rose regularly along the west bank of the narrows from the Priest Hole right up to the reeds, but these fish were very difficult to tempt as they still seemed preoccupied with the emerging pupae of what I think are micro sedges. As each day warmed up, these tiny brownish grey flies were everywhere and although I covered hundreds of rising fish with a plethora of different flies, my success was limited to just 3 fish that fell to a size 16 olive F fly. Interestingly, fishing into the margins along the East bank of the narrows up to Rainbow Point was a completely different story. Despite far fewer fish showing, a single well-presented dry fly was taken with confidence on a fairly regular basis. Productive dry fly patterns were Summer Bibio, Flat Daddy, Foam Daddy, Suspender Black Buzzer and olive F fly.

When dries proved ineffective, a long sink tip line with either a weighted damsel nymph or a small black Pine Squirrel lure retrieved in a slow figure of eight, brought numerous fish to the net from either Swing Gate Bay or off the weed bed on the corner of Boathouse Bay. Of particular note for this combination was Thursday morning, anchored in Swing Gate Bay, I netted 10 fish in the first hour. My tally for the week was 67 fish with several rainbows in the 3 -4 lb range plus 2 good blues, one of which was at least 4Lb. A couple of notable firsts for me also this week – on my very first cast of the week, I managed to christen my new 4 weight rod with a lovely 2 lb brownie, and then while out for a late evening stroll I spotted a dog otter swimming up the narrows.  It dived and resurfaced several times before getting out to the right of the reeds at the top of the North end and disappeared.

Having fished Coldingham Loch regularly since 1980, I have always considered its huge populations of buzzers to be the foundation of its top quality dry fly sport, however, as a closing observation, and one I find hard to explain, throughout this week, buzzers were conspicuous by their total absence. This was underlined by the fact that when the stomach contents of the 3 fish I killed were checked, they were full of Pea Mussels, Cased Caddis larvae and a few tiny iridescent black beetles with not a buzzer or adult midge in sight.

Gallery below – thank you for sending in pictures much appreciated 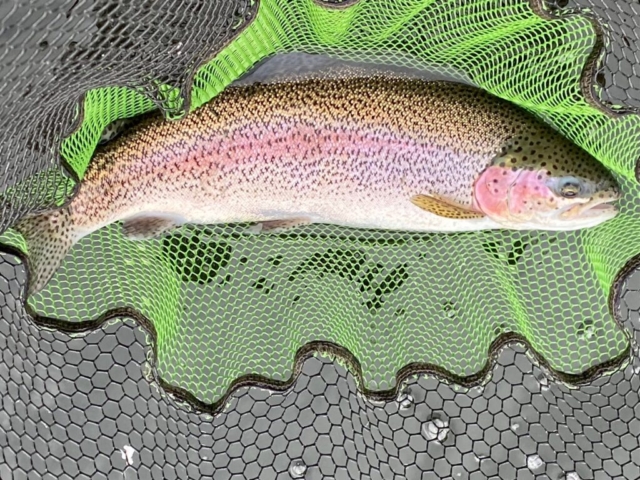 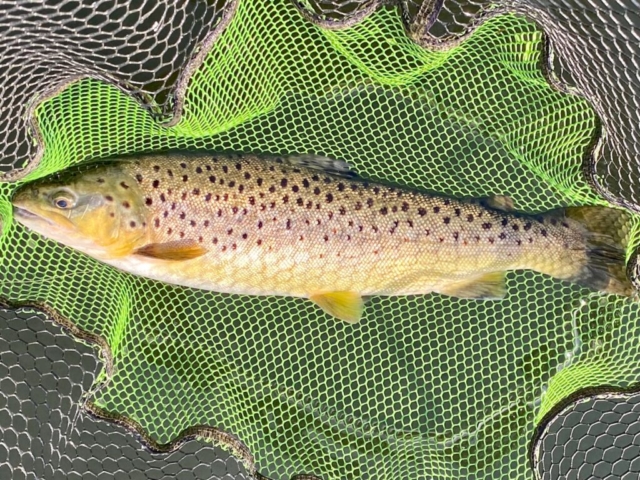 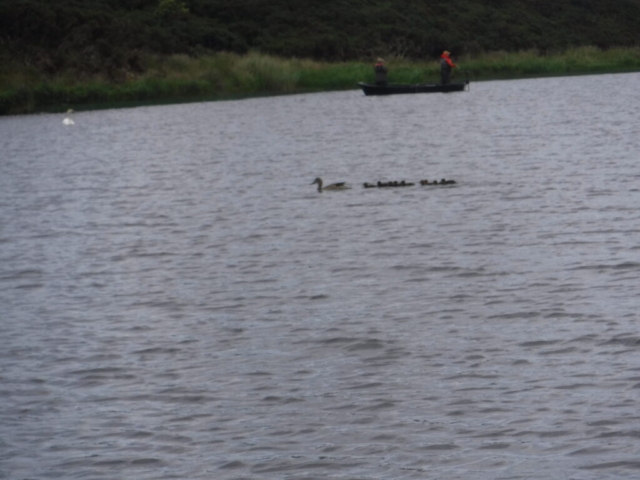 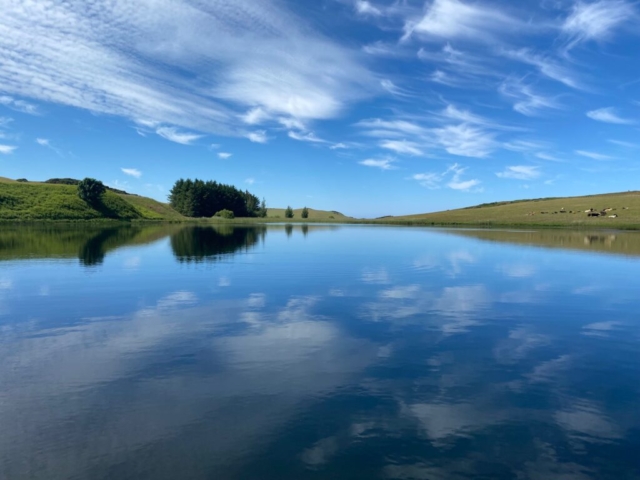 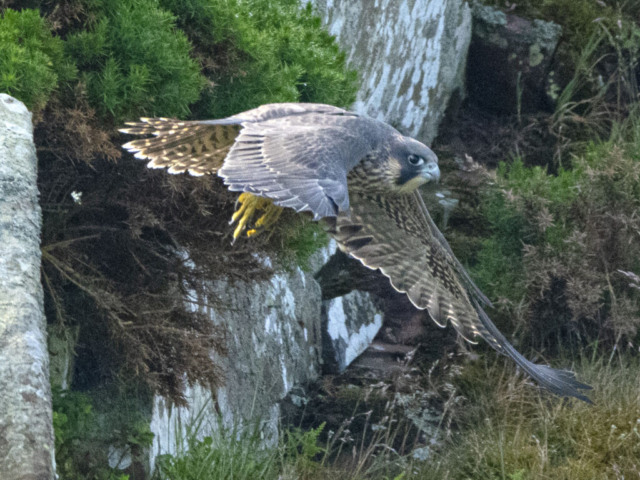 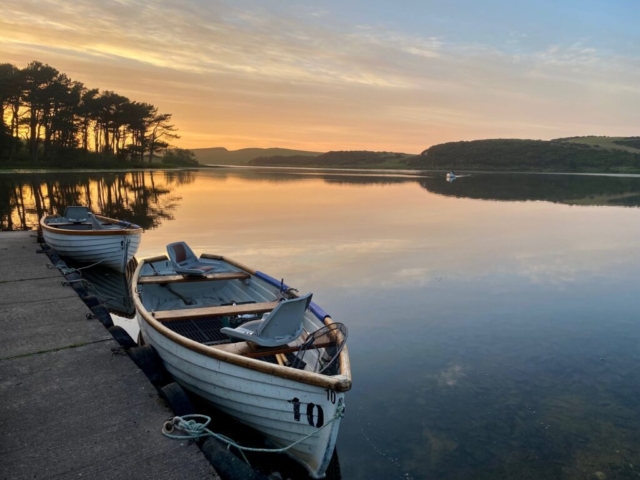 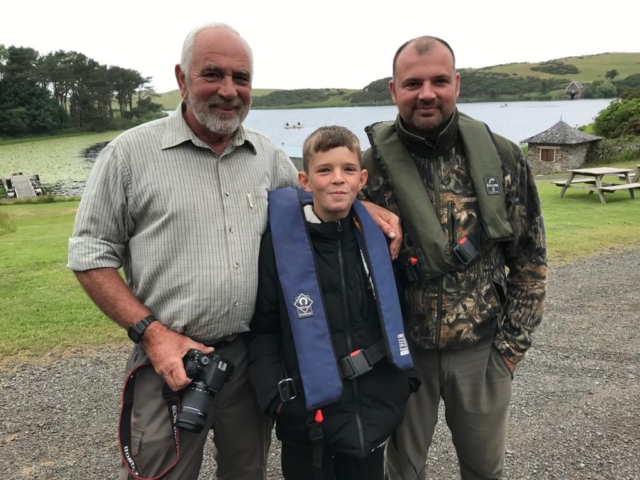